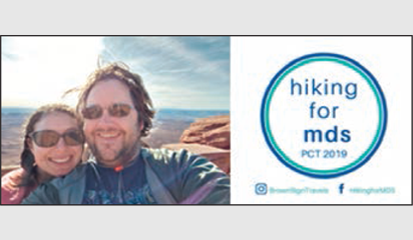 Starting in April, JS Allen and Bonnie Getter began hiking the Pacific Crest Trail to raise money for MDS. The trail, known simply as the PCT, is a continuous 2650-mile wilderness trail stretching from Mexico to Canada through California, Oregon and Washington. Just hours east of the largest cities of the west coast, the trail crosses deserts, forests, rivers and the highest mountain range of the continental United States. The long-distance hikers that follow its spine race the seasons to hike as far as possible. The campaign was inspired by JS Allen’s father, who was diagnosed with MDS.

Known by their trail names, Kosher Frank and Diamo, this hike is dedicated to Kosher Frank’s father, who suffers from MDS, and will be fundraising for the MDS Foundation and its general mission to support research and patient support. Typically, they would be attempting a thruhike, that is hiking the entirety of the trail in one year and generally in one direction; however, the extensive snow pack across much of trail this year will persist far into summer, transforming a northbound thruhike from a test of endurance into a trial of patience and technical skill. In short, they will go as far north as they can, physically and logistically.