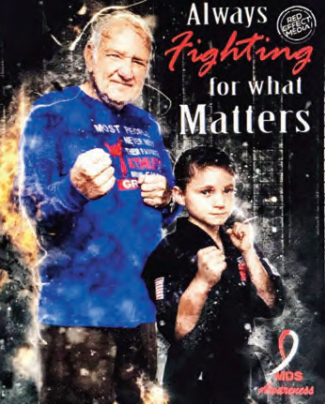 I spent a couple of years watching my blood counts go up and down and my platelet count decreasing. It was June 2017 when I was diagnosed with MDS by Dr. Ali at the James Carey Cancer Center in Hannibal, MO. We made a trip to MD Anderson Medical Center in Houston, TX for a second opinion. They agreed on the diagnosis, and the treatment. My wife and I discussed the options we had, and I decided one good year was better than 2 or maybe 3 years with the treatment. I discussed this with each of my five children and received mixed reactions. I asked them to prepare the grandchildren in their own way, when they thought the timing was right. My three older boys were ok with my decision. My youngest daughter was upset and called to talk to me. She had cried all week and thought I needed to do whatever was needed even if it was only 2–3 years. My older daughter became very angry and told me in no uncertain terms that I would not let any of them get by with that decision. She also felt I needed to do all I could to fight the disease.

Jeanne, my 4th child, has a 9 year-old son, Chase, who is in karate. He wrote the letter here, and gave it to me. I also received a letter from another grandson who said he was thinking about me and hoped I do not die. With all the objections from my kids and grandkids, I changed my mind and started treatment for MDS in July 2017 in Hannibal, Missouri. My 9 year-old grandson, Chase, has progressed in his karate training, and I have shared in his accomplishments. He had a karate belt made with his name on one side and MDS Awareness on the other side; and a key chain made for me that has the MDS logo. He told me to carry it with me at all times. He told me he was fighting for me and wanted me to fight for him. I know he supports me, and I support him. Together, we have both done quite well, in spite of hurdles that we faced. 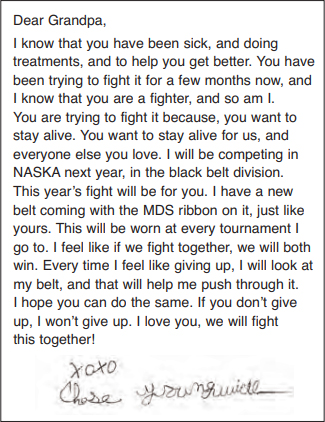 I have gotten good reports on my progress. The Dacogen treatments are working well for me so far. I have to take the drip for five consecutive days each month. The week of the treatment, and the next week, I feel very tired and not very energetic. There is also pain in my legs, an upset stomach, and I walk slowly as the platelets and blood counts go down. However, this all improves over the following two weeks, as counts go up and I have some quality time. After a couple treatments, we found I did not need transfusions. I am now able to go an extra week before the next treatment as the counts continue to increase. This gives me an extra week of feeling better before it is time to start over. I continue to go to MD Anderson for check-ups every 6 months. They agree the treatment, and the extra week, is working well for me.

Chase has also progressed very well in his karate. He won 3 national titles at the end of 2017, and has done quite well in many tournaments. Additionally, he was recruited by a travel team out of St. Louis. His photo has been used on several promotional magazine covers — some of which have allowed him a platform to encourage donations to the MDS Foundation. Chase also tried out for the USA team at the age of 10, and qualified to compete in 6 events in Athens, Greece, at the end of October. While in Athens, he heard on the news that it was MDS Awareness Day, and chose to wear a shirt they had made that says “Fight for what Matters” with the MDS ribbon. He wears this quite often. Chase made finalist in all of his weapons and forms events, and came home with Bronze Medals in all of them. 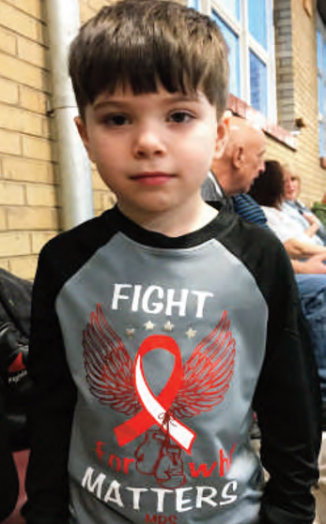 His brother, Jacob (age 5), told me at Christmas that he is going to fight for me as well when he goes to his karate tournaments. He also wears the “Fight for What Matters” shirt.

The love and support of my whole family has meant so much to me, and has brought me this far. My kids, grandkids, and I can talk about my disease as well as about their shortcomings, disappointments, and accomplishments. We are all fighting very hard to work together to improve and better ourselves in all areas. I have an 80 year-old sister who also calls me after treatments to keep updated on my test results. My wife is the one who is with me at each appointment, keeping the records, and making sure we have the information we need. She encourages me daily. The week of the drip I am not very alert, and she drives me around. The weeks to follow, as I feel the side effects and discomforts, she is there for me. I love her very much and I am thankful to have her help. I was amazed to find this year that I could still get on the dance floor with her. In the picture of us dancing, you can see the MDS keychain my grandson gave to me, hanging out of my pocket.

The love and support of my whole family has meant so much to me and has brought me this far. 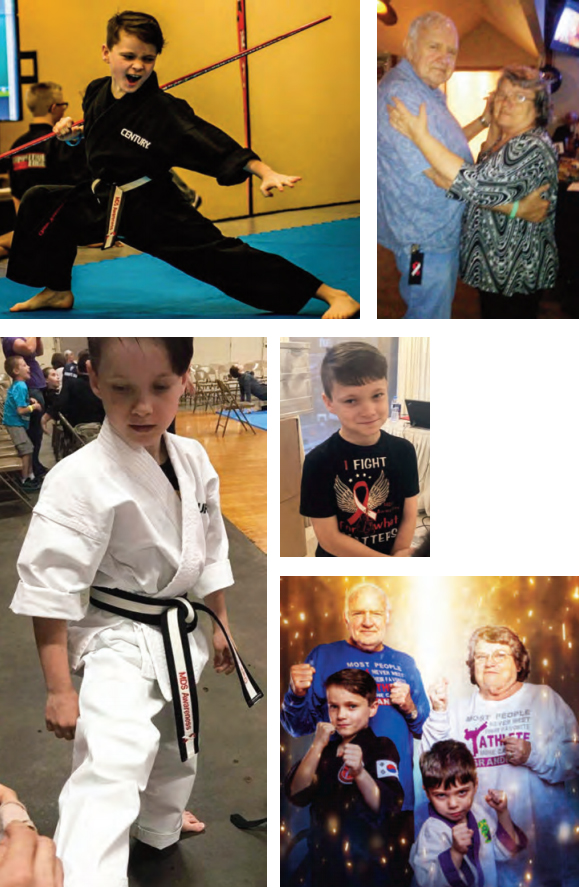 I would like to encourage everyone to do as my family wanted me to, and give treatment a chance. One of the doctors at the clinic, Dr. Buckstein, told me prior to starting the treatments that even though the success rate of the treatment for a man my age may be low, I may be the one in that percentage — but would not know without trying.

With other health problems as well, I was amazed to find it IS working well for me. I met a woman at my last visit at MD Anderson who told me she has been using this same treatment for 12 years. My wife asked her if she also felt tired and had no energy while taking the treatment. She replied she used to, but as her hemoglobin and other counts went up things improved.

I am glad I was encouraged by my family to do the treatments and feel I have made progress. I realize the treatments will continue the rest of my life. I have also been comforted and encouraged in watching and communicating with others dealing with the same disease. For those with MDS, please do not feel defeated and give up. There can be hope and improvements as time goes on.