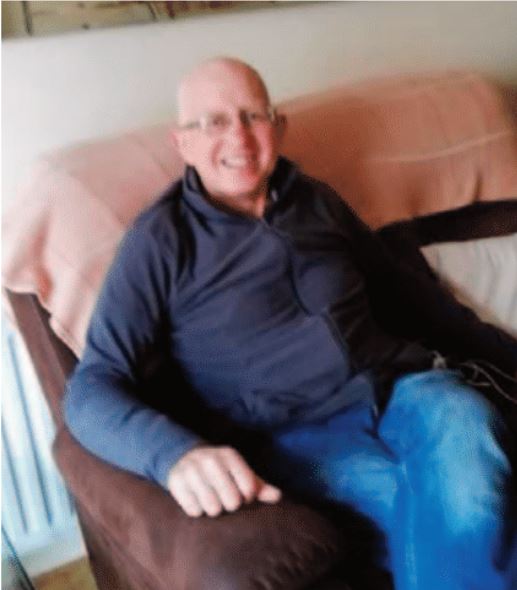 I had a biannual blood test to monitor my cholesterol as I had a heart stent fitted 17 yrs previously. My platelet count was observed to be 100, down from usual 150/200.

I was referred to a nearby haematologist in Galway who did various tests over the next year to conclude in January 2020 that I had MDS. He advised that a stem cell transplant was my only solution and referred me to Dr. Conneally at St. James Hospital in Dublin. This is the only one in Ireland to do SCT. My diagnosis is that the TP53 gene has mutated and gone rogue making a chromosome complex problem. It attacks the maintenance of correct levels. Therefore the levels may drop soon again or after a while of treatment with Vidaza. They need stable levels to create a window of opportunity in which to do a marrow transplant. But it is possible that the activity of the TP53 may destroy new marrow, making it pointless doing the transplant. They will figure this out from the next marrow of 23 June with results in late July leading to a transplant in or after September, if it’s deemed suitable.

I started on monthly Vidaza injections in March, which I received over 7 cycles. I didn’t encounter any issues with Vidaza when given anti nausea meds at the same time. It worked to excite the marrow into improving my blood numbers so I was suitable to have the SCT. Platelets increased from 48 in Jan to 129. Early on my brother was tested to be a likely donor but found unsuitable. One from abroad was found on the database.

I was admitted to Galway Hospital on 15th September for a week of tests and prepping for the SCT. I also had a Hickman line/port inserted in my chest. This was my first taste of the confinement I will have to endure.

I arrive to Denis Burkitt Ward St. James Hospital before 6 pm. Entry is via a double door system. Outer door has to close before opening the inner one. Sink, shower and toilet are activated by non touch sensors which gives an inkling as to the attention to cleanliness. All walls are covered with hard plastic sheeting for ease of cleaning. Day –12 the 23rd, I was given many examinations and visited by the consultant who gave clearance to go ahead with the chemo which started about 2:30. The first treatment took half an hour, straight after that, the second one was an hour, and the third was two and a half hours later and lasted for 4 hours. That was the routine for the next 3 days (day –11, 10, 9) for 4 days total.

During my free time I wanted to be active while I felt up to it. I briefly walked the corridor for exercise.

The next 2 days after that period were free of chemo treatment, that is Sunday and Monday (–8,7). Sunday night I slept and Monday I woke up quite a new man and had a good day.

My next chemo was Tuesday at 4 a.m. for two hours and that chemo will be given every 6 hours until Friday morning.

I experienced very slight side effects, i.e. on the Sunday a bit of vomiting and diarrhoea with some light-headedness, on other days it was an easy time.

On Friday it changes to a different chemo for 12 hours and the same drug on Saturday and Sunday for 10 hours each day. I was forewarned that these last days can be a bit rough. The prediction was correct as the chemo caused nausea, irritability, lack of sleep. This brings me to the goal of day 0 transplant day on Monday, I didn’t feel the best in the morning but hoped being finished with chemo that I would recover quickly. I was told mid-morning that the transplant plasma wouldn’t be arriving until the following day, so this gave me more time to recover. My platelets were down at 10 and needed to be at 50 so I was given a transfusion. I was well improved by day 0, 6/10/20. I received preparation drugs by IV drip with the donor stem cell plasma bag arriving around 12:30 pm. I was expertly set up by nurse Margarita assisted by nurse Hindu. As with all IV work, there is constant sterilising wiping of the parts they are using. The drip of salvation started at 12:49 pm. My BP, temp, oxygen level, and heart rate were taken every 5 minutes to check in case I had a reaction. Everything went well and the last drop passed into me at 1:40, 50 minutes in total.

I was left to rest for a few hours before getting more IV meds. These finished up around 9 and I looked forward to an IV chemo free sleep for a change. 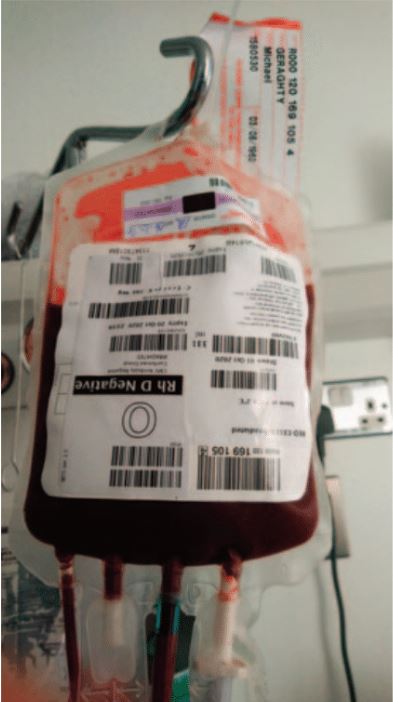 These days establish a routine of IV anti rejection drugs which give me a headache if given too quickly. Also each day I get a transfusion of platelets and possibly blood. This pattern will be in place for about three weeks until my new system is producing enough on its own. On day two, a sore mouth and throat set in. I struggle with even soft food. Food tastes very bland and I become super sensitive to sugary tastes and don’t want them. A special mouthwash is tried with a very short-term effect.

This day I’m recommended to shave my hair which is falling out. On day three the consultant specifies connection of a morphine pump to deal with it. She also recommends from day 4 being fed through my line. This will give adequate calories and vitamins and I will feel full.

I had a great rest when I felt the energy drain from my body and got restful sleep for the first time in a while. At the end of the day I was well rested.

I had woken a few times during the night but still was very well rested in the morning. However, by about 10.30, I was experiencing the wriggers as I had the day previous. These severe shakes were cured within half an hour. I spent the rest of the day as weak as a kitten and slept a lot.

I began to feel progressively better each day and ate at each mealtime as the effect of the morphine eased the pain. Therefore, the line feeding only lasted 5 nights, reduced to half ration for the last two nights. I established a daily routine based around daily drips which would finish or be stopped around 2 to allow me to shower, exercise, and walk the corridor for 20 mins. Some days I felt tired and slept thus delaying my routine until evening.

I was released from hospital eventually on November 1st on a Sunday in the afternoon. It was a long awaited event, to breathe fresh air and embrace my partner Trish. She had come with lots of luggage, driven by my sister-in-law Joanie with the assistance of my brother John who would bring Joanie home. We found our nearby apartment which was arranged by the hospital in a complex where the Irish Bone Marrow Trust owns apartments for this purpose. This was to be home for us for probably six weeks. I was feeling weak and not very able to do any of the lugging, but my helpers sorted that out. Later Trish served up some Irish stew which went down very well.

I had to attend the hospital two or three days a week for checkups. Meanwhile we made efforts to get out for at least an hour a day to walk. I steadily improved in strength over two weeks. Having the car with us gave the chance to do some trips, however due to the COVID pandemic restrictions, we were limited in how far we could go. Over the period of two weeks, however, other than being lethargic, having a GVHD skin rash and GVHD mouth sores, I had discomfort at night. Initially the main one was a dry mouth which would cause me to awaken 5-6 times to take a drink. This was increasingly accompanied by the need to urinate which became increasingly painful in my urinary tract. Clots and blood also became obvious. The hospital team gave me various remedies without improvement. Eventually, after two weeks of freedom, they decided I would need to come back into the hospital for investigation. This necessitated me attending the emergency room on Saturday 15th to be admitted to an isolation ward where I had a COVID test. On the following day I was moved to the Burkitt ward as being COVID negative. They quickly determined I had an infection by the BK virus. They explained that while the chemo clears out most viruses the BK one is a very old one which is present in everybody but is kept dormant by a normal immunity system. They also detected activity of a glandular fever causing virus. They started me on treatment for both. At this stage urinating had become so painful that they fitted a catheter with a urine bag. This mostly confined me to bed for three weeks. When I was released I felt much weaker than at the initial release. I was released by the hospital clinic to go home to Mayo on December 15th, just in time to get settled for the Christmas season. However, I would return to the clinic at least every two weeks for the foreseeable future. It took me probably six weeks to get to a comfortable level of strength and lose most of the lethargy. However, bouts of lethargy are ever present after mild exertion, such as gardening and wheel barrowing. Most of my active time, other than walking or cycling, is spent gardening with Trish. In Summer of 2020, we spent a lot of time transforming our surroundings, by planting flower beds and developing a greenhouse, which was all new work to us.

er a month. I was sent to a urologist who recommended Vesomni, which again did not have an effect after a month. More tests were done and it was found that it was the BK virus again. This time I was given IV treatment similar to that as an inpatient. This happened weekly over four weeks. However, it did not improve and it was concluded that it was also decreasing my blood quality. My oncologist decided to stop it as well as the Betmiga and Vesomni, and work on increasing my immunity instead. The severity of the pain has eased, but the 4-6 nightly urinations still persist. While for the first few months I would be very awake for each event and return to sleep quickly, I am now a bit drowsier doing it but still get back to sleep quickly. Each bout of sleep is accompanied by a separate distinct dream. Some of which I am happy to waken from! 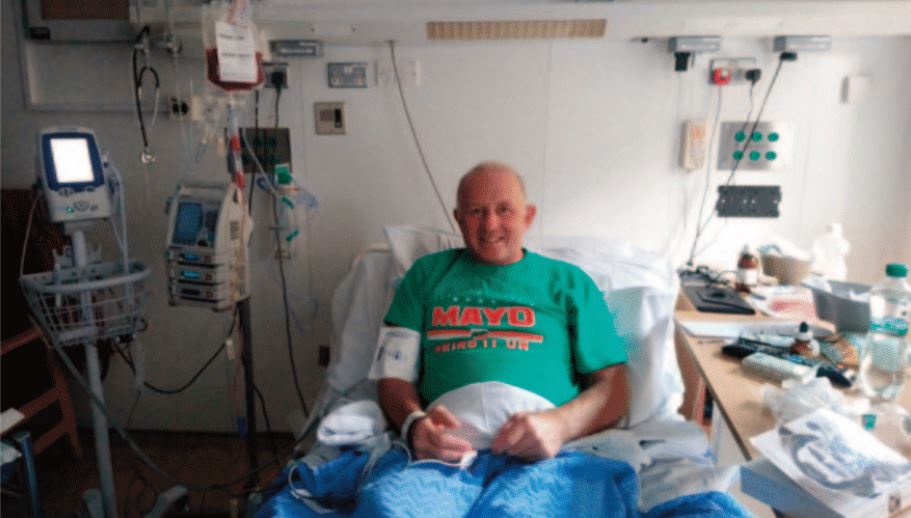 Throughout my recovery I found myself evolving through it. My taste buds sensitivity to salt, spice and sweetness eased, but not fully. I perceived my surroundings differently over time, not realising that my early perceptions were off.

This remains the situation as of mid-July 2021.