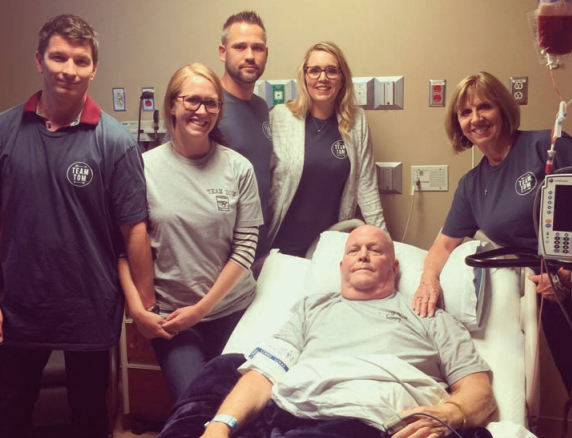 I have what?? Myelodysplastic Syndrome?? That’s how my journey began six years ago at age 62. It was the fall of 2013 when the common symptoms of MDS started. Fatigue and joint pain became a common occurrence in my everyday life. After a visit to my family doctor, blood tests were run and the results indicated some abnormalities. I was referred to a local hematologist who ordered additional blood tests along with a bone marrow biopsy and CT scan. With those results in hand, I was diagnosed with MDS. Since I’d never heard of the disease, the MDS Foundation and the Leukemia & Lymphoma Society were excellent resources to learn more about MDS. I also joined an MDS support group on Facebook.

I live in Hendersonville, Tennessee, a suburb of Nashville, and was fortunate that I was able to receive all my treatment close to home in Nashville. In January 2014, I was referred to Tennessee Oncology at the Sarah Cannon Center for Blood Cancer at Centennial Medical Center. The Center is named after patient Sarah Cannon who was better known as Minnie Pearl of the Grand Ole Opry! She offered the use of her given name and financial support to promote cancer research and patient education. 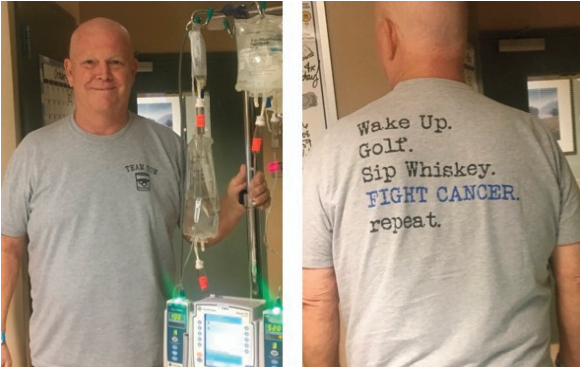 My subtype of MDS was RAEB. I was on “watch & wait” for 8 months. When my blood counts became lower and another bone marrow biopsy showed an increase in blasts, I began treatment with Vidaza in August 2014. I went 7 days a month, M-F and M-Tu and received 3 subcutaneous injections in my stomach. Other than irritation at the shot sites and fatigue, I had minimal side effects, but I did retire in September since my job required traveling and my immune system was very weak.

After 19 months of shots, I had a port implanted in March 2016 and began receiving Vidaza infusions on the same 7 day schedule. In October 2016, I walked my daughter down the aisle at her wedding in Denver! I changed to a 5 day schedule of infusions in January 2017.

In June 2017, after 32 rounds of Vidaza, my counts did not recover and a bone marrow biopsy indicated 12% blasts. I was referred to Dr. Carlos Bachier at the Blood and Marrow Transplant Clinic at Sarah Cannon Cancer Center. I was evaluated with a series of tests and determined to be a good candidate for a stem cell transplant. Since there was no donor match from the international registry and my siblings were not suitable donors due to health issues, the decision was made to have a haploidentical SCT. I have two daughters so they were both evaluated as potential donors. My younger daughter Lisa, 32, was chosen as my donor since she had never been pregnant, and my older daughter had given birth to our three awesome grandchildren. 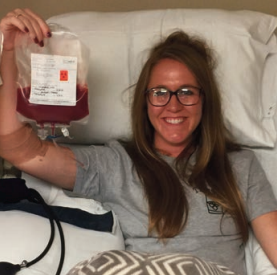 I was admitted to the Immunosuppression Unit at Sarah Cannon Cancer Center on August 21, 2017, which was the date of the solar eclipse. That seemed appropriate since we anticipated some dark days ahead. I began an intense round of 7-3 induction chemo to prepare my immune system for my upcoming SCT. The chemo was administered thru a PICC line. My wife kept a daily journal and began a website for me on CaringBridge.org to keep our family and friends updated. I had severe mucositis from the chemo which made it difficult to eat. I knew I would eventually lose my hair, so I decided to shave my head one night. My wife was surprised the next morning to find a strange bald headed man in my room! On days when I felt good enough, I walked laps around the floor with a goal of 2 miles a day. My bone marrow biopsy showed no evidence of disease, but I had to wait until my ANC count increased before I could be discharged. After 32 days in the hospital, I went home on Sept. 21 for 15 days. During that time, I had a Central Venous Catheter implanted for my upcoming SCT.

On October 6, 2017, I was readmitted to the hospital for 5 days of chemo and one Total Body Irradiation treatment prior to my SCT. Lisa arrived from Denver and began her series of Neupogen injections to stimulate stem cell growth. She received two shots in her stomach for 5 days. She did not have any side effects from the shots and even ran in a 5K event one morning before coming to the hospital for her shots. She posted daily videos on Facebook to encourage others to register as donors on BetheMatch.org. On October 11, she had 580 million stem cells harvested in 7 hours of apheresis. Her only complaint was being bored during the procedure! I consider myself conservative, and it was the family joke that I would change after receiving her liberal stem cells! That didn’t happen. They were stem cells, not brain cells! 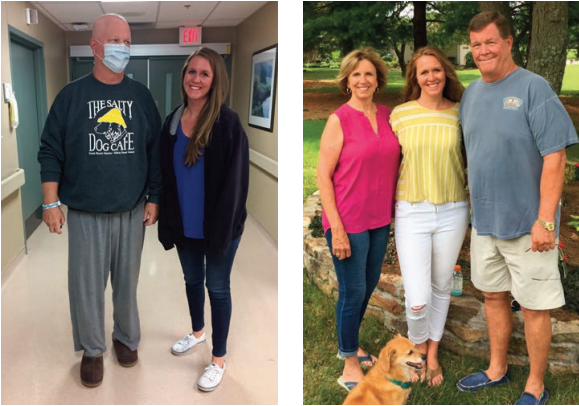 On October 12, 2017, with my family surrounding me, I had my SCT which took about 30 minutes. Afterwards, I was given another 3 days of chemo and began all the medications for transplant patients. On the 18th day after my transplant, my bone marrow biopsy showed no blasts! I became an impatient patient waiting for my counts to increase. Finally, after 25 days in the hospital, I was discharged on October 30. Since I live within 30-45 minutes of the hospital, I was thrilled that I was allowed to go home instead of staying in a facility near the hospital. It was a real treat to be home for Halloween. My bone marrow biopsy in November showed 100% donor cells and no blasts! I had lots of follow-up appointments and stayed at home most of that winter. Since that time, I have had regular follow-up visits and bone marrow biopsies. I have had some minor skin and lung GVHD and neuropathy in my feet, but no other complications.

I celebrated my 2nd birthday last October, and I enjoy playing golf with friends 3-4 days a week! I am fortunate that my haploidentical transplant was successful. I have been blessed with great doctors and nurses, supportive family and friends, and lots of answered prayers in the past six years, and I am thankful for my wonderful wife Gail who has been by my side in sickness and health for 47 years. I hope my journey will be encouraging to others diagnosed with MDS.